PROVA is an Online Probabilistic Reasoning System, where the community can evolve the reasoning for any hypotheses supported by verifiable sources.

The path to the Truth is the Proof

Because a Proof has the greatest power to change people’s beliefs.

The Truth exists but it consists of many pieces that are spread out and not easy to find.

If we collect the pieces and put them in order we will see the path to the Truth: the Proof.

During a time of falling monuments, we need a clear understanding of true values. It’s time for reasoning.

The user creates a hypothesis supported by at least one citation from a verifiable document. The hypothesis may be a stand-alone or be used as a premise for other hypotheses.

Other users bring new premises (hypotheses, documents) and suggest logical connectives that they believe may support or reject the hypothesis effectively building the reasoning tree.

Based on votes the system calculates the total probability and significance of the hypothesis.

People can see the Most Probable Reasoning and all alternative views.

News and Media: The system filters-out fake news and promotes valid information. The Internet articles will include references to the reasoning.

Internet Discussions and Chats: The users can ban other abusive or spamming users by providing valid reasoning.

Community Decision Validator: The reference point for finding motivations for social, legal, political, economic decisions. The decision of government or corporation may be compared with a decision generated by a community using the reasoning system.

All Hypotheses are connected by conditional dependencies and logical rules into a single graph.

The system calculates the Probability and Significance of all Hypotheses of the graph.

The base math is Bayesian Networks.

Two networks for each reasoning: Proof and Disproof.

Significance, calculated as the Likelihood Ratio.

The green arrow shows that the premise hypothesis contributes to the proof and the red to the disproof.
The green hypotheses are True and the red are False. The grey color means low hypothesis significance.
All colors are obtained from the calculation of a complete reasoning tree.

Just after logging-in the user can search the hypotheses.
If the user wants to elaborate on the hypothesis he/she can do it in Workspace.
Ex: Search for “covid” and click on “The decision to close the economy during COVID was right”.

Graph shows logical connectives and conditional dependencies. Here nodes represent Hypotheses and directed links – the Premises. The branch all the way to the left represents the Most Probable Reasoning Path.

It’s organized according to the Most Probable Reasoning Path in reverse order. Each section is a Hypothesis. By clicking on the title you can see the full text with the best voting comment.

Each row corresponds to the Hypothesis with sortable columns of Name, Vote Counters, Validity, Probabilities, and Significance. The advanced users can experiment with reasoning by switching to HypoLab mode.

To obtain a result the System generates a Program Script. The script can be downloaded and independently executed on any computer. It may be used for experimentation and as a certification of validity of the reasoning.

During the voting the User may enter a comment or select the existing one on either the green or the red side. 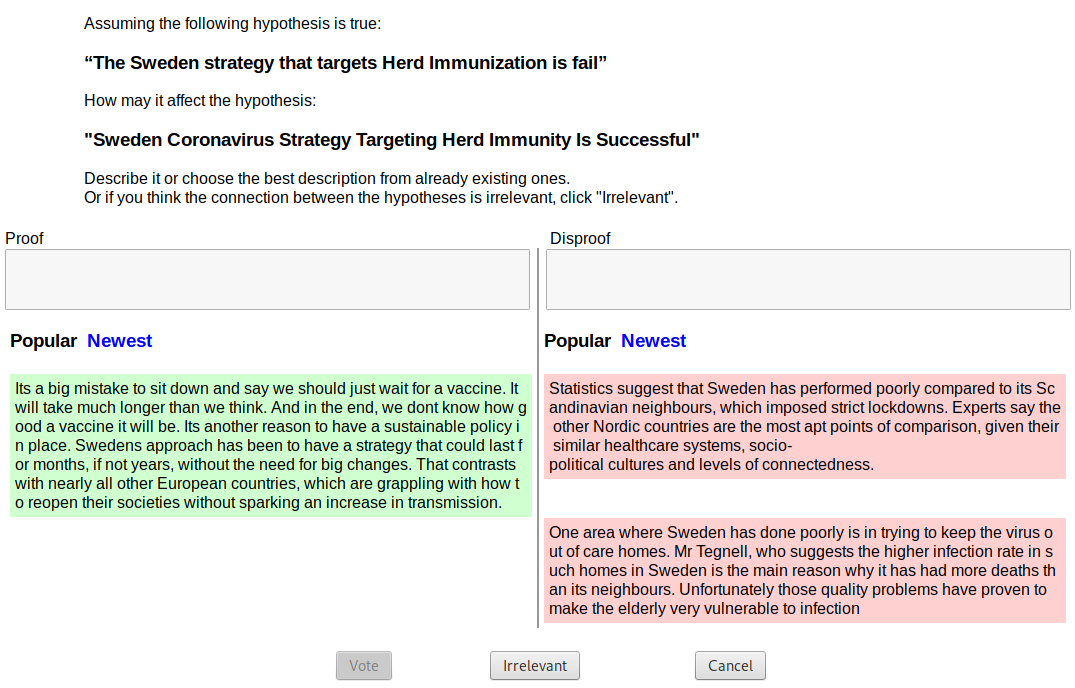 Here the user can experiment with reasoning and study how parameters may affect the outcome of the reasoning.

The user may set his own threshold  to accept a belief – the Scepticism of Significance.

The user can set the decay level that discounts older votes in favor of newer ones. The decay with different rates allows the user to see how the probability of the proof changes with time.

The user can play with votes by changing its counters.

The user can set a True/False evidence for any node of the hypothesis.

The user gains Voting Power based on his total contributions for all proofs.

PROVA is not just a fantasy

It exists and ready for demonstration. Contact us for a live demo.

Most of its functionality is already implemented and tested.

It runs on Linux in Tomcat.

Its source code is currently in a private Git repository.

It waits for exposure.

We try to follow the proven success of Wikipedia which is based on truth-leveraging policies and editorial that respects the policies.

We should adopt the most important Wikipedia’s policies and practices:

We believe that society should be driven not just by vote-based democracy but also by intelligence.

Democracy may be implemented as an equal opportunity to expose your own reasoning or to support the existing one.

The individuals who contribute more to the reasoning should have a larger impact on society.

The reasoning is like a path that leads you to the conclusion that then becomes your belief. The main goal of the system is to show the path.

The goal of the project is to create a team that will:

We are currently the team of only two people. With your help we can grow.

To bring the project to success we need financial help.